Fastest semi truck of 2017 is insanely fast and powerful

In the end of last year, Volvo launched their Iron Knight semi truck. What’s important about Iron Knight is that it is the fastest truck in the entire world. World’s fastest semi truck is insanely powerful and quick.

When it comes about Semi trucks, speed is not the first thing that comes to people’s minds. People don’t expect Semi trucks to move at rapid speed. Volvo however, had other things in mind for sure when they decided to break all the barricades.

Volvo pulled out many different stunts in the past as well. There are many titles that Volvo already holds. With the launch of the World’s fastest semi truck in the last year; Volvo trucks claimed two awards for the fastest truck in the entire world. “The Iron Knight” is a 2400 HP beast. Giving Goosebumps to any sane person, The Iron Knight produces an insane torque of 4,425 pounds.

Volvo utilized the extraordinary driving skills of Boije Ovebrink, their go-to driver for these record-breaking runs. Boije likewise happens to have his own particular 3-decade profession in motorsports. Boije Ovebrink set out two complete runs for both the 500-and 1,000-meter runs.

World’s Fastest Semi Truck broke the record of its own predecessor: 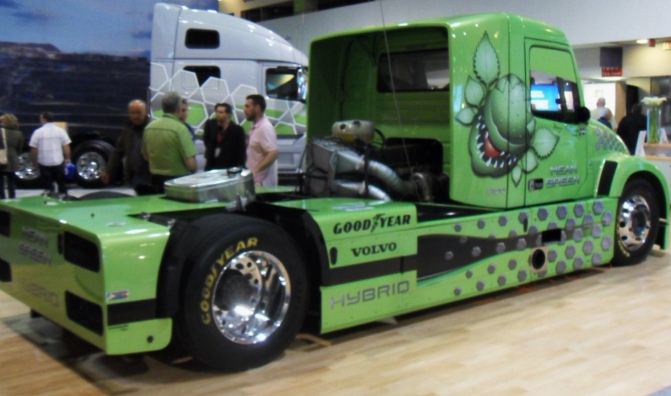 What happened was that in the wake of finishing one run, Ovebrink turned around and took another run in the same hour. This most recent run by Ovebrink through Volvo run beats his past speed record, which he set in Volvo Trucks’ “Mean Green Hybrid” in 2012. Contrary to the Mean Green Hybrid, The Iron Knight has 600 more HP and is about 2,205 pounds lighter. The other time Volvo has put resources into building speed record-breaking trucks was with the 1,600-hp “Wild Viking.”

Steering the 4.5-ton behemoth was Boije Ovebrink, the 1994 European Truck Racing Champion and is the holder of five past speed records. It’s not easy to drive a Semi truck some feet above the ground level at an average speed of 150 Mp/h. The newest record is a milestone for the driver as well. Volvo knows what to do and how. While Volvo wasn’t pursuing a top speed record, The Iron Knight, however, still reached the best speed of 276 km/h all through its exhausting testing.

Iron Knight is one furious beast. Volvo has manufactured the truck from advanced technology and innovation. Every product is made just for this particular truck. additionally, Every part that assembles the truck is unique and made under highly sophisticated and careful environment. The only two things that aren’t completely redesigned are the engine and the double grip transmission. Volvo uses the same transmission unit in every truck. Volvo Iron Knight is furious, insanely fast and powerful. Now that would make us think twice before overtaking any Volvo truck on the road. Volvo fans are extremely overwhelmed by this milestone. The World’s fastest semi truck is available for sale.